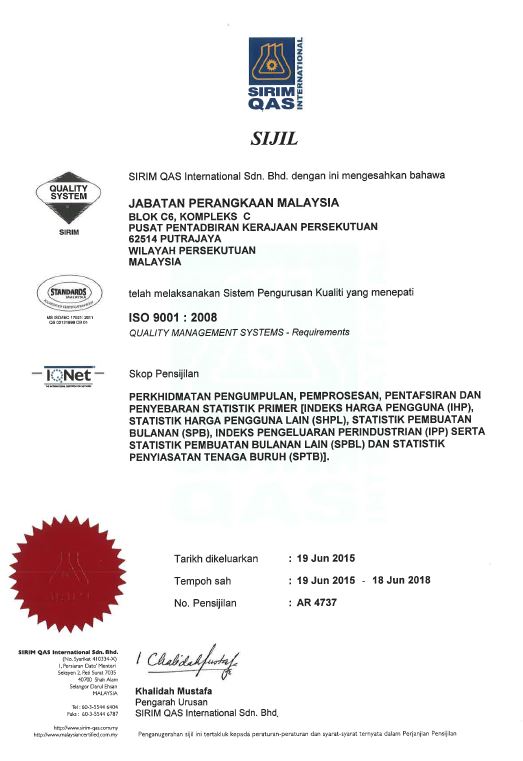 ISO is derived from greek word meaning ”equal” which portrayed ”International Organisation for Standardization”. MS ISO is referring to a written standard that explains guidelines and basic requirements for quality management systems. It comprises of an organised working systems based on the international standard requirement.

The implementation of MS ISO in Public Service conforms with the Surat Pekeliling Kemajuan Pentadbiran Awam (SPKPA) Bil.2/2002. The rationals of implementing the MS ISO in public services is to encourage government agencies to produce an efficient and effective Quality Management System according to the standard. Nevertheless, it will only be recognised after the Quality Management System is given with the certificate recognition.

Considering the changing environment due to rapid development, the Department managed to improve its management quality system when it was awarded with 2000 version. This transition requires the Department to make amendments to the MS ISO quality system documentation. The MS ISO 2000 version requires greater commitment and involvement from the top management which aims to ensure organisational effectiveness level. MS ISO 9001:2000 recognition was attained from SIRIM QAS International and IQNet, and it is valid until November 5, 2011. The scope under the MS ISO 9001:2000 is also expanded as compared to version 1994 which includes services on collection, processing, analysis and dissemination of primary statistics (Consumer Price Index including other statistics related to Consumer Price Index, Monthly Manufacturing Statistics, Industrial Production Index including Other Monthly Manufacturing Statistics and Labour Force Survey Statistics).

Currently, the Department was successfully obtained MS ISO 9001:2008 recognition. This recognition was received from SIRIM QAS International and IQNet, and it is valid until 18 June, 2018. The scope under MS ISO version 2008 remains unchanged with that of version 2000. Nevertheless, the 2008 version has detailed out and improved on work process that was outlined in the 2000 version.