A healthier economic outlook is anticipated in the coming months 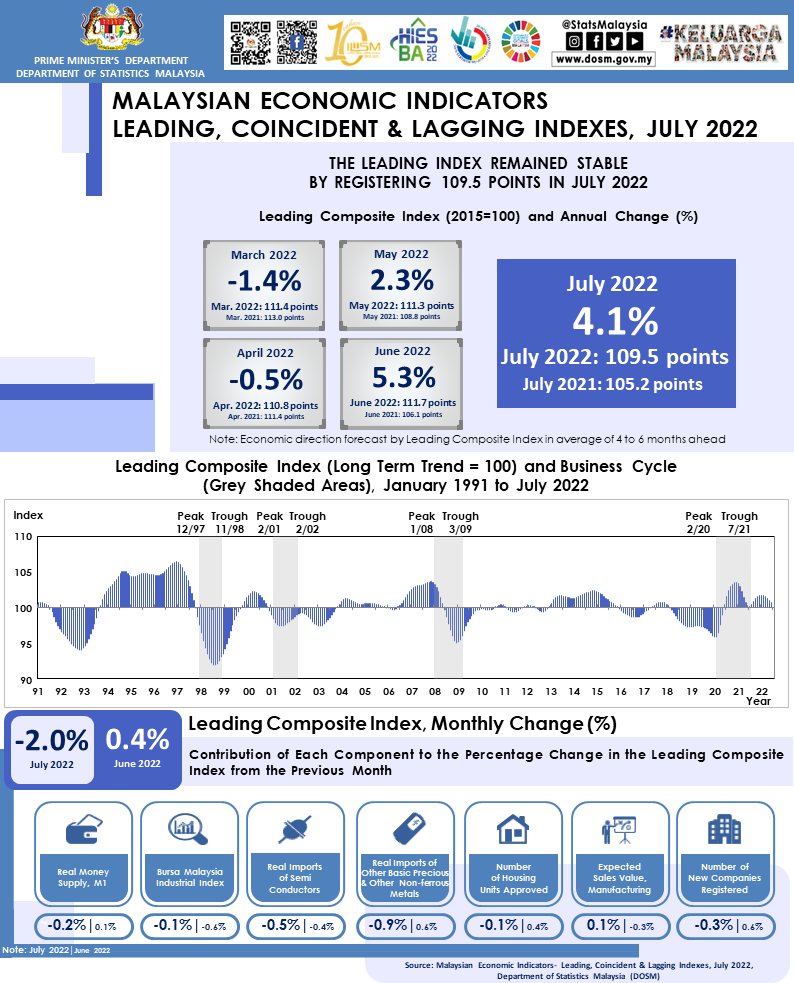 The Leading Index remained stable by registering 109.5 points in July 2022

The Leading Index (LI) which predicts the economic direction on average of four to six months ahead, remained stable by registering 109.5 points in July 2022 (July 2021: 105.2 points). This corresponds to LI growth of 4.1 per cent year-on-year, lower than 5.3 per cent in June 2022. Real Imports of Other Basic Precious & Other Non-ferrous Metals persisted as the main impetus to the growth due to an increase in demand related to platinum-based metals. Looking at month-on-month performance, LI posted a negative 2.0 per cent in the reference month as against an increase of 0.4 per cent in June 2022. The downturn trend was particularly influenced by the Real Imports of Other Basic Precious & Other Non-ferrous Metals, which contributed by negative 0.9 per cent to the percentage change of LI in the said month. Even though LI's performance was slightly lower in July 2022, it indicates that Malaysia’s economic prospect is expected to remain optimistic ahead as the smoothed long-term trend index continues above 100.0 points. This is in line with various government initiatives and administrations that are responsive to the current situation.

For the current economic standing, the Coincident Index (CI) in July 2022 showed a downward trend for the first time this year to record 119.6 points (June 2022: 121.5 points). In terms of year-on-year comparison, the CI narrowed by 0.1 percentage points to 12.5 per cent in July 2022 compared to 12.6 per cent in the previous month. On a monthly basis, the CI weakened to a negative 1.6 per cent mainly due to a negative 0.9 per cent declined in Capacity Utilisation in Manufacturing sector and a negative 0.5 per cent in Industrial Production Index.

The complete indicators on Leading, Coincident and Lagging Indexes are shown in the following Table 4

The full publication of the Malaysian Economic Indicators: Leading, Coincident & Lagging Indexes, July 2022 can be downloaded through eStatistik Portal.