Output of Malaysia’s SMEs Surged to RM1.0 Trillion for the First Time Since 2003 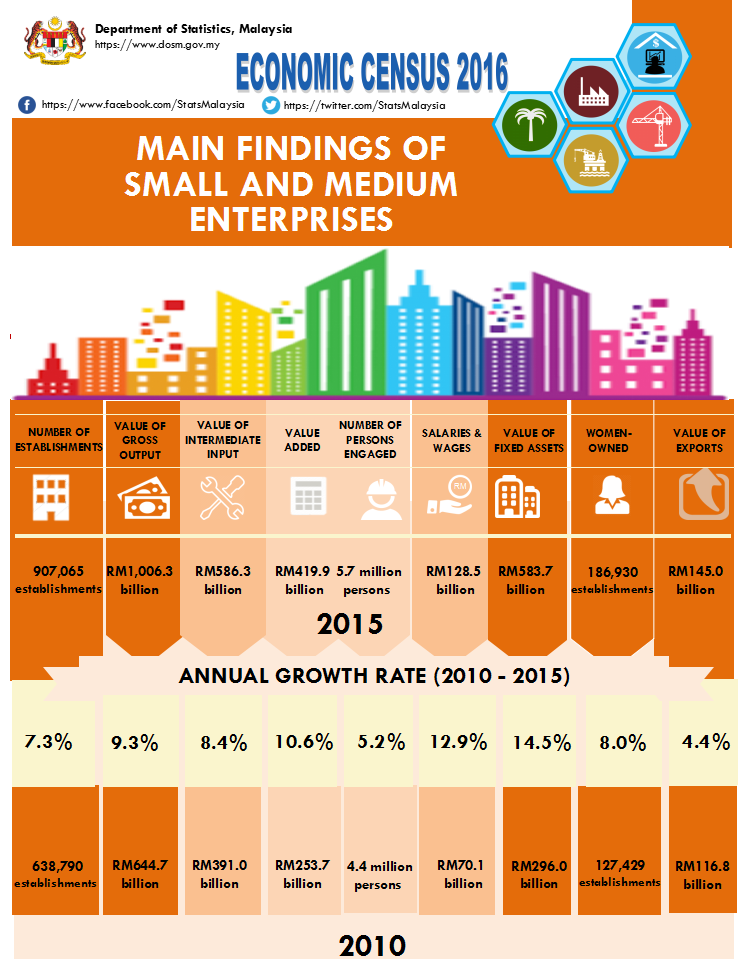 PERFORMANCE OF SMALL AND MEDIUM ENTERPRISES

In 2015, value of gross output generated by SMEs amounted to RM1.0 trillion for the first time since Economic Census was carried out, registering an annual growth of 9.3 per cent. The growth was propelled by Services with 11.0 per cent, particularly in Transportation & Storage (16.3%), Administrative & Support Services (12.9%) and Education (11.8%). This was followed by Construction which grew at 10.7 per cent within the period.

Malaysia’s employment was largely contributed by SMEs with 5.7 million persons, constituted 64.7 per cent to the total. Services recorded the highest contribution at 66.8 per cent followed by Manufacturing (18.4%) and Construction (11.1%). Meanwhile, total salaries & wages disbursed by SMEs in 2015 stood at RM128.5 billion with an annual growth of 12.9 per cent.

In 2015, women-owned SMEs accounted for 186,930 or 20.6 per cent of total SMEs in Malaysia with an annual growth rate of 8.0 per cent. Majority of 173,323 establishments or 92.7 per cent were engaged in Services sector followed by Manufacturing sector of 9,519 establishments (5.1%). The remaining establishments were involved in Construction, Agriculture and Mining & Quarrying sectors.