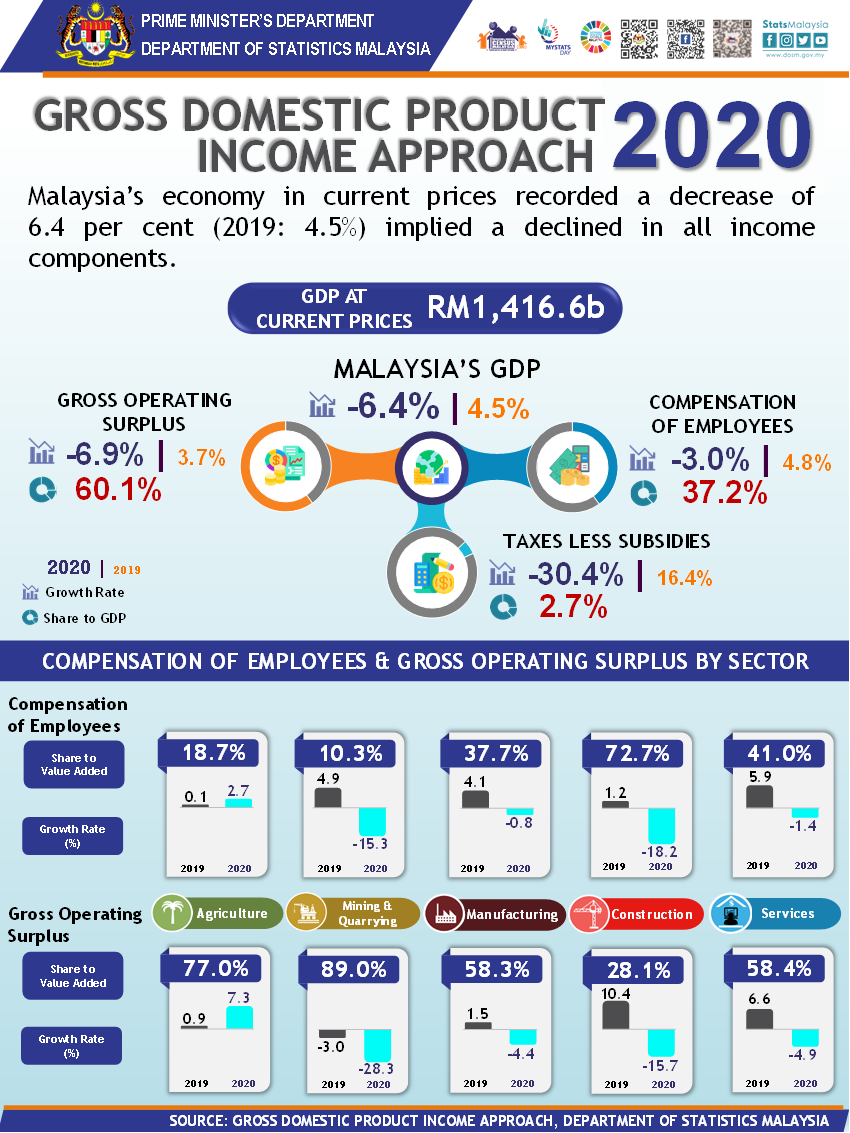 Services sector was the largest contributor to the total of Malaysia’s CE, generated 63.5 per cent (2019: 62.5%). Meanwhile, the share of Manufacturing sector accounted for 22.6 per cent as compared to 22.1 per cent in the previous year. Construction contributed 7.9 per cent, followed by Agriculture and Mining & quarrying which accounted for 4.1 per cent and 1.9 per cent of share respectively (Chart 2).

CE includes remuneration, in cash or in kind, payable by an enterprise to an employee in return for work done during the accounting period. Following the weakened in domestic economic activities in 2020, CE contracted by 3.0 per cent from a growth of 4.8 per cent in the preceding year.

The CE in Manufacturing sector posted a marginal negative 0.8 per cent as against 4.1 per cent recorded in the previous year. The decrease was influenced by Electrical, electronic & optical products which declined 0.2 per cent (2019: 2.4%). Meanwhile, Petroleum, chemical, rubber & plastic products grew at 4.6 per cent mainly supported by rubber products. Furthermore, Non-metallic mineral products, basic metal and fabricated metal products contracted by 4.3 per cent (2019: 5.2%).

Services sector continued as a major contributor to the total GOS with a share of 56.0 per cent. This was followed by the Manufacturing sector at 21.6 per cent, Agriculture at 10.5 per cent and Mining & quarrying at 10.0 per cent. Meanwhile, contribution of Construction sector was 1.9 per cent as showed in Chart 4.

Meanwhile, GOS of Manufacturing sector shrank 4.4 per cent as compared to 1.5 per cent in 2019. The performance was influenced by a double-digit decline in Petroleum, chemical, rubber & plastic and Non-metallic mineral products, basic metal & fabricated metal products at 11.3 per cent (2019: 0.6%) and 23.6 per cent (2019: 1.5%) respectively. Moreover, Wood products, furniture, paper products and printing activities further decreased 13.1 per cent (2019: -2.2%). Nevertheless, GOS in Agriculture sector strengthened 7.3 per cent from a marginal growth of 0.9 per cent in 2019. The growth was supported by Rubber, oil palm, livestock and other agriculture which registered a double-digit growth of 14.3 per cent (2019: 1.9%) backed by a higher commodity prices especially oil palm prices.

The GOS in Mining & quarrying sector further declined 28.3 per cent as against decreased 3.0 per cent in the previous year attributed to a lower price of crude oil and natural gas. Likewise, GOS in Construction sector dropped by 15.7 per cent as against 10.4 per cent recorded in the preceding year largely affected by the poor performance in Civil engineering activities.

The full publication of Gross Domestic Product Income Approach 2020 can be downloaded through eStatistik portal.