Rebasing of Malaysia's Gross Domestic Product to Base Year 2015 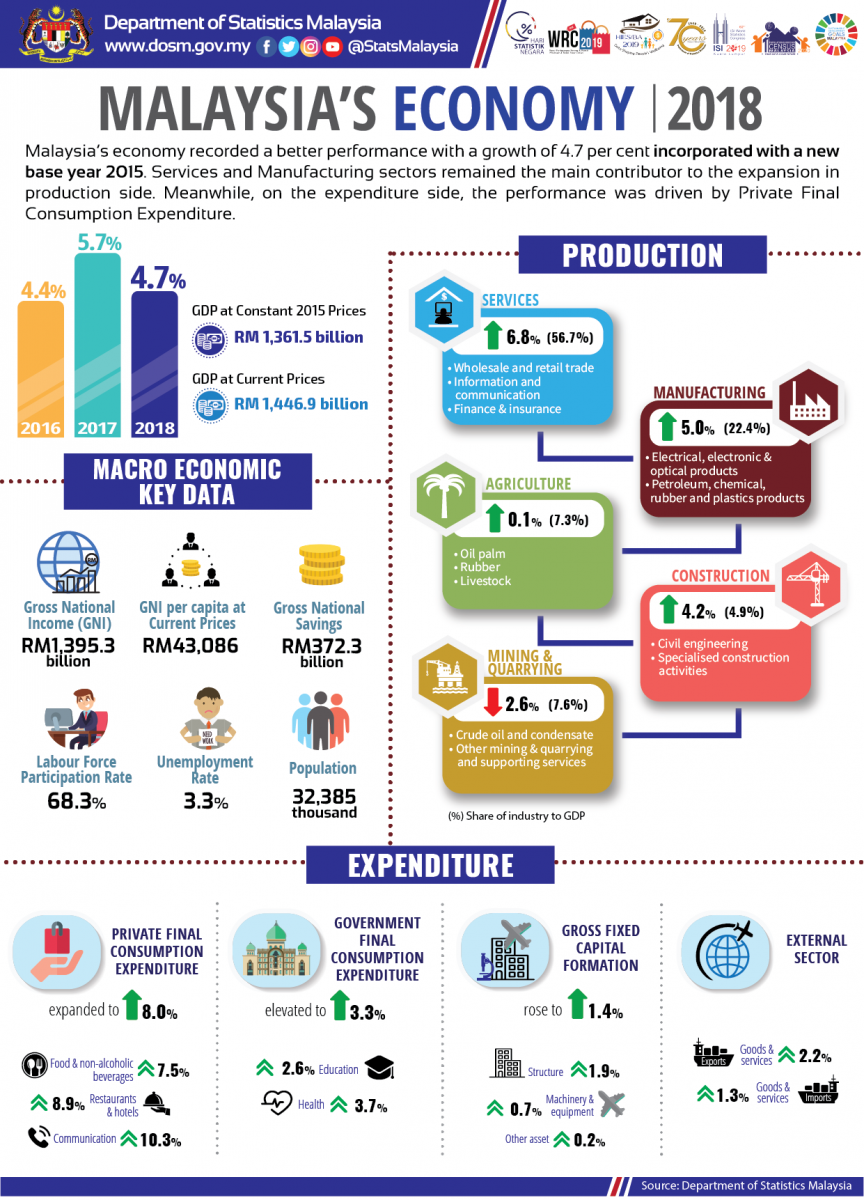 Department of Statistics Malaysia (DOSM) has completed the rebasing of Malaysia’s Gross Domestic Product (GDP) from base year 2010 to 2015. GDP Constant prices are now expressed in 2015 prices. Rebasing of GDP is a normal statistical procedure performed by National Statistical Office around the world to ensure the statistics reflect the current economic structure. 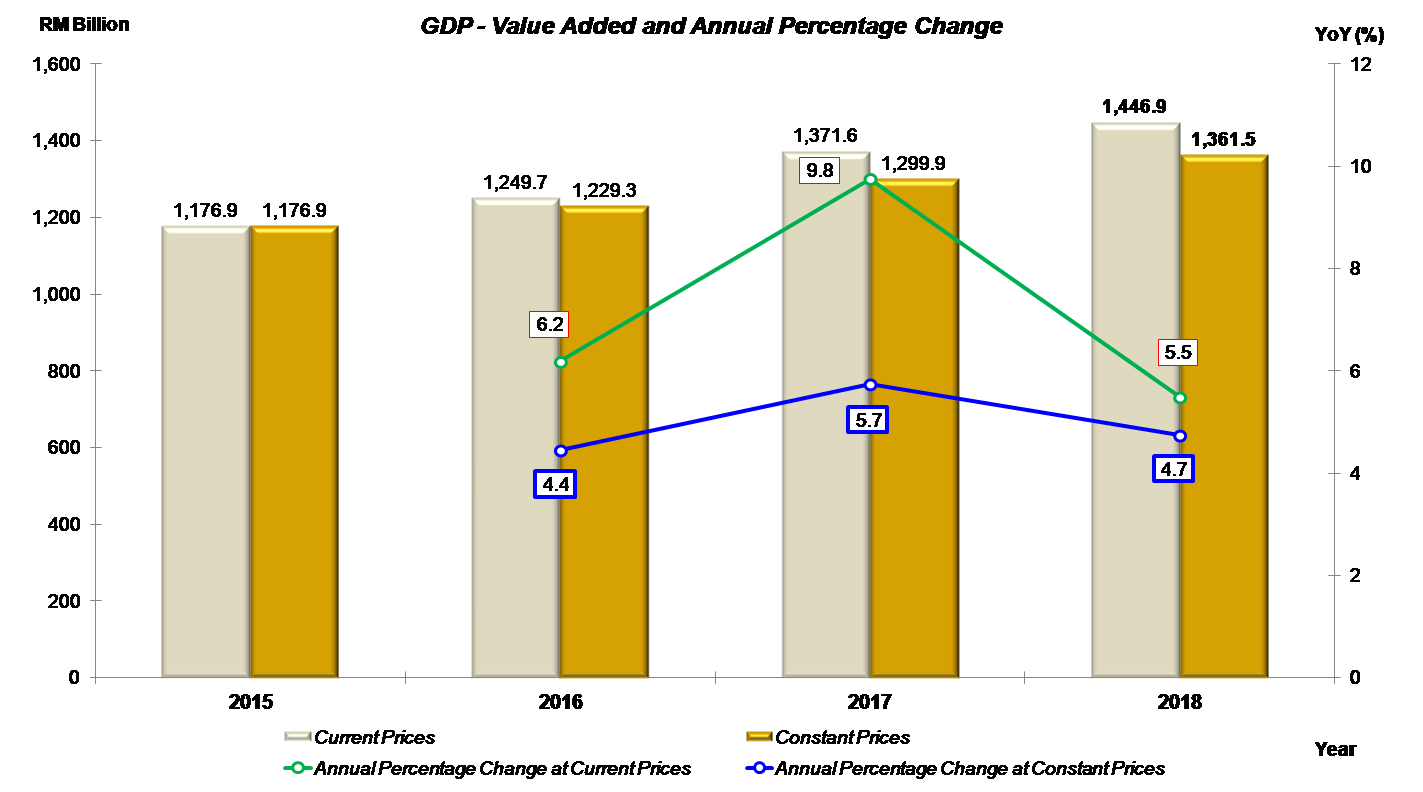 This rebasing exercise is the seventh rebase exercises that have been carried out by DOSM. The rebase of GDP provides DOSM an opportunity for refining the methodology and incorporating the most recent data. By using data from Economic Census 2016 and Supply and Use Tables 2015, the GDP base year 2015 has enables policy makers and analysts to obtain a more recent and accurate set of current economic condition.

Estimates of GDP at constant prices are fundamentally measure changes in the volume term of economic activity while keeping relative prices constant. The base year’s relative price weights become less accurate through the years as prices of goods and services changed from time to time. Therefore, to update the base year price weights to a more recent reference year, it is essential to periodically rebase the GDP.

In the new base year, Services and Manufacturing sectors served as a major contributor to the economy with a combined share of 79.1 per cent. The share of Services sector has reached 56.7 per cent in 2018 which surpassed Eleventh Malaysia Plan target of 56.5 per cent by 2020. In 2018, Services sector strengthened to 6.8 per cent supported by Wholesale & retail trade and Information & communication. Wholesale & retail trade augmented to 8.1 per cent backed by retail segment which elevated to 10.1 per cent. Information & communication posted a growth of 8.3 per cent contributed by communication and computer services activities. Furthermore, Finance & insurance performance remained favourable by posting a growth of 5.7 per cent.

Manufacturing sector grew 5.0 per cent from 6.0 per cent recorded in 2017. Electrical, electronic & optical product remained as the key engine of growth for this sector by registering 6.3 per cent. Meanwhile, Petroleum, chemical, rubber & plastic products remained at 4.0 per cent supported by refined petroleum, rubber and plastic product. In addition, Transport equipment, other manufacturing & repair increased to 6.4 per cent as compared to 5.3 per cent in the previous year. 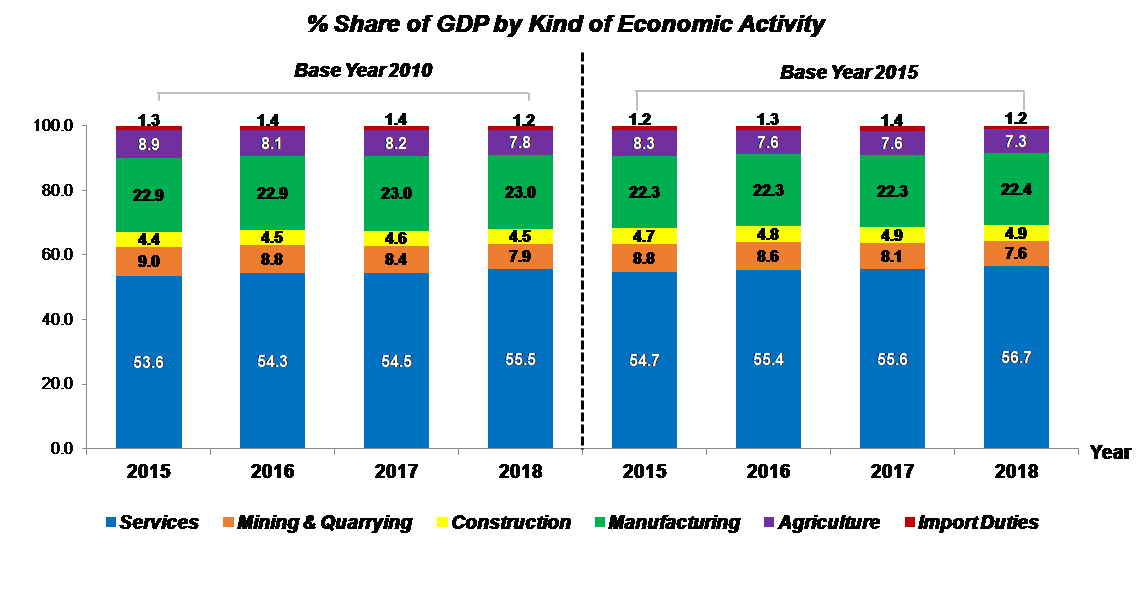 On the expenditure side, the domestic demand constituted 93.0 per cent of GDP and prominently led by Private Final Consumption Expenditure (PFCE). PFCE expanded to 8.0 per cent induced by Food and non-alcoholic beverages (share: 22.0%), Restaurants & hotels (share: 10.7%) and Communication (share: 8.5%). The consumer’s expenditure on services contributed 51.7 per cent while spending on goods accounted for 48.3 per cent.

Gross Fixed Capital Formation (GFCF) eased to 1.4 per cent in 2018 from 6.1 per cent in the preceding year. GFCF accounted 24.6 per cent to the economy, reached a value of RM350.3 billion in current terms, while in real terms stood at RM335.6 billion. The slower momentum in GFCF was due to Structure which registered 1.9 per cent, in line with the performance of the Construction sector. Furthermore, Machinery & Equipment recorded a marginal growth of 0.7 per cent from 11.4 per cent in 2017.

Following the rebasing of GDP, other national accounts statistics will be realigned with the new estimates. The first quarter of 2019 economic performance will be published on 16th May 2019. Further information on rebasing GDP can be obtained from the website of DOSM at www.dosm.gov.my.