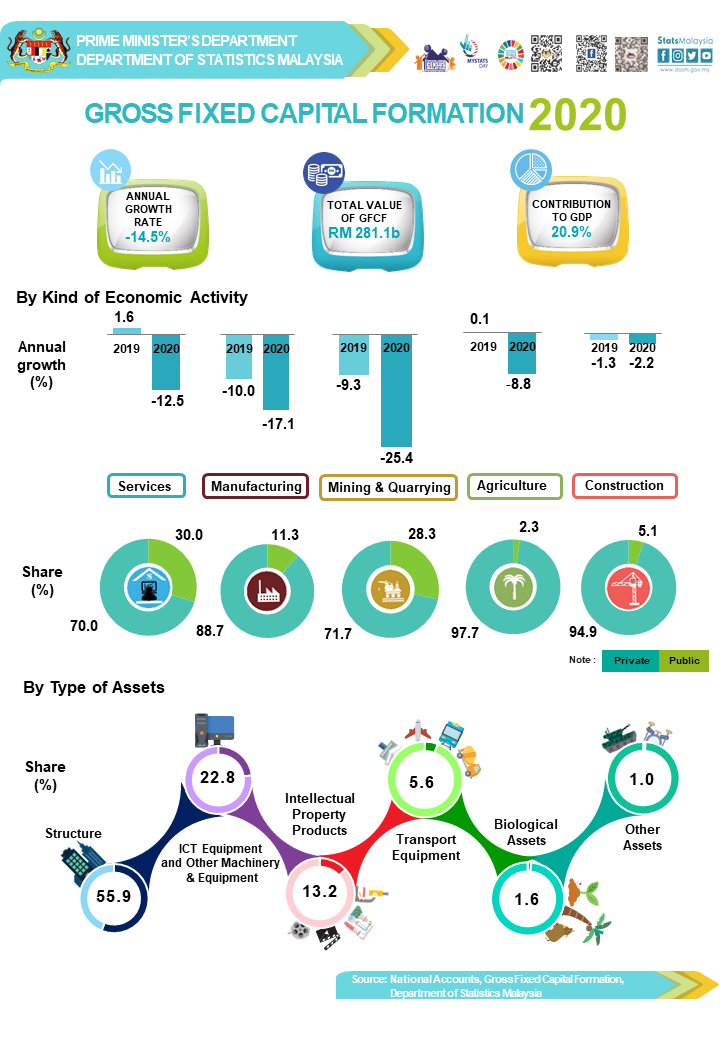 Malaysia’s Gross Fixed Capital Formation (GFCF) growth contracted 14.5 per cent in 2020 as compared to negative 2.1 per cent in the preceding year attributed the COVID-19 pandemic which has affected the performance of all economic activities (Chart 1). This was the biggest contraction since the Asian Financial Crisis whereby GFCF declined 43.0 per cent in 1998. The reduction in investments will lead to a lower production capacity in the future and thus have implications for potential output. GFCF remained as the second largest component in Gross Domestic Product (GDP) with a share of 20.9 per cent (2019: 23.1%) from the overall economy as shown in Chart 2. The fixed asset investment continuously led by Private sector. Meanwhile, Structure was the main contributor for GFCF by types of assets.

GFCF BY KIND OF ECONOMIC ACTIVITY

GFCF further dropped to 14.5 per cent from negative 2.1 per cent in the preceding year (Exhibit 1) due to the lethargic performance in all sectors in 2020.

Exhibit 1: GFCF by Kind of Economic Activity at Constant 2015 Prices 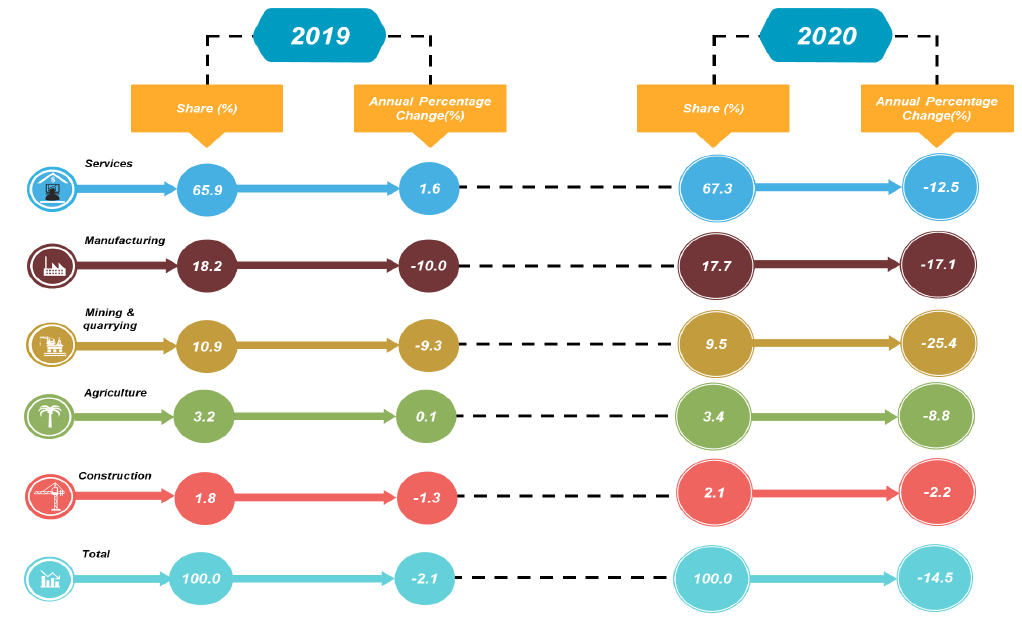 GFCF in  Services sector contracted to 12.5 per cent (2019: 1.6%) influenced by the decline in the performance of Transportation & storage and information & communication and Finance, insurance, real estate & business services at negative 24.9 per cent and negative 10.9 per cent. On the other hand, Food & beverages and accommodation posted a growth of 0.5 per cent as  compared to the preceding year.

GFCF in Manufacturing sector dropped by 17.1 per cent as against a decline of 10.0 per cent in the previous year. The sluggish performance was attributed by Petroleum, chemical, rubber and plastic products which recorded a decrease of 24.4 per cent. Electrical, electronic & optical products and transport equipment has also weighed down the overall performance of Manufacturing by contracting 17.2 per cent (2019: -6.8%). Moreover, Non-metallic mineral products, basic metal and fabricated metal products and Textiles & wood products declined 15.1 per cent (2019: -7.2%) and negative 7.8 per cent (2019: -7.5%) respectively.

Mining and quarrying sector declined by 25.4 per cent from a decrease of 9.3 per cent in the preceding year.  Agriculture sector also contracted 8.8 per cent (2019: 0.1%) attributed to the weakened performance in all sub-sectors. Meanwhile  Construction sector decreased by 2.2 per cent in 2020, steeper than the decline of 1.3 per cent recorded in the previous year.

GFCF BY TYPE OF ASSETS

Exhibit 2: Percentage Share of GFCF by Type of Assets at Constant 2015 Prices 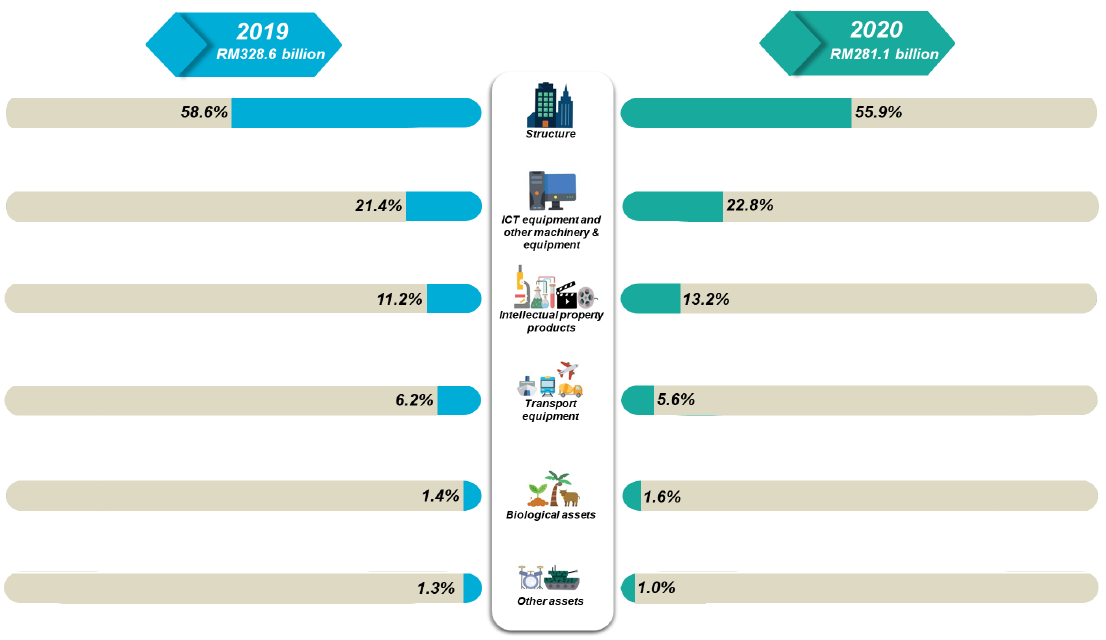 GFCF BY SECTOR AND KIND OF ECONOMIC ACTIVITY

Exhibit 3: Percentage Share of GFCF by Sector at Constant 2015 Prices 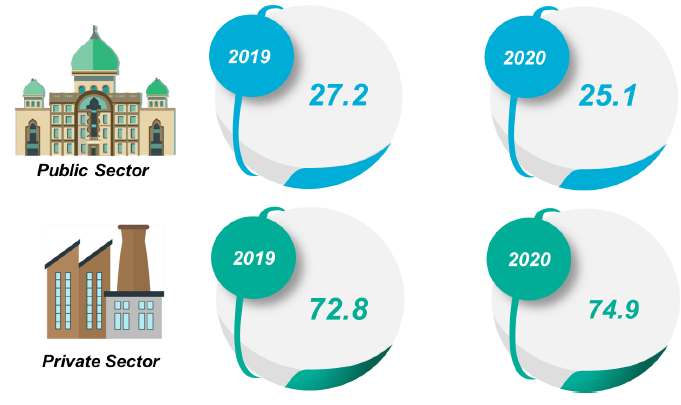 Chart 3: Percentage Share of GFCF by Sector and Kind of Economic Activity at Constant 2015 Prices 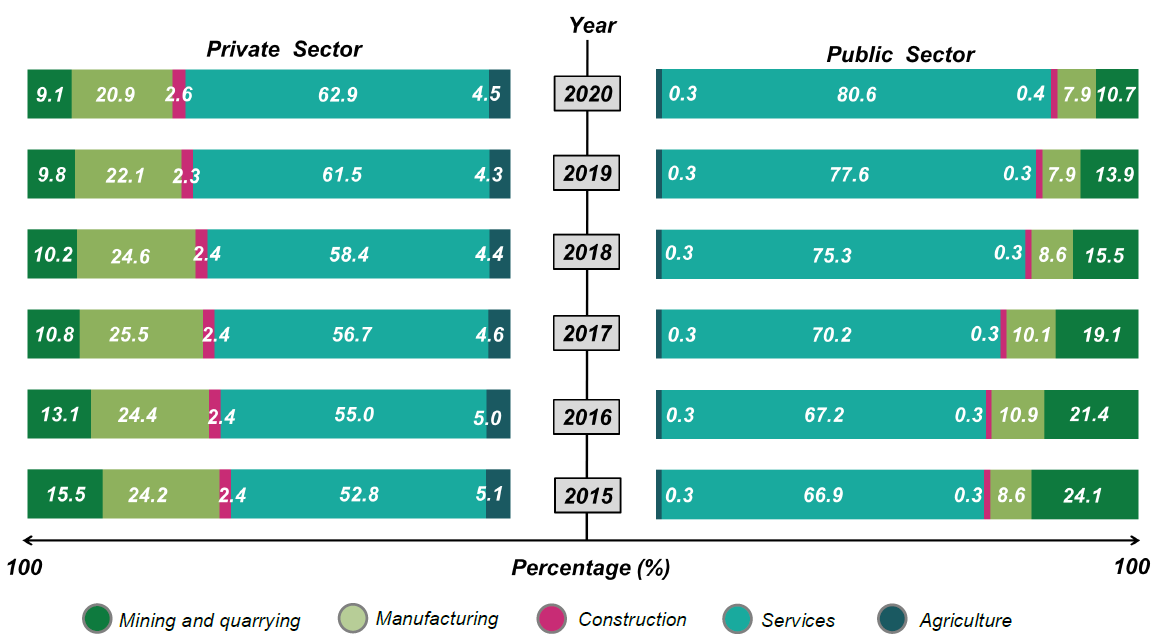 Services and Manufacturing activities were the main contributors in GFCF of Private sector as depicted in Chart 3. The share of Services activity stepped-up to 62.9 per cent (2019: 61.5%) while Manufacturing activity maintained its position as the second largest contributor with a share of 20.9 per cent (2019: 22.1%). The remaining activities made-up 16.2 per cent of the total Private sector of GFCF.

GFCF of Public sector was largely dominated by Services activity with a highest share of 80.6 per cent. This was followed by Mining & quarrying and Manufacturing activities at 10.7 per cent and 7.9 per cent share respectively.

The full publication of  Gross Fixed Capital Formation (GFCF) 2020 can be downloaded through eStatistik portal.