The Gross Output Value of RM1.1 Trillion was Registered as the First Ever Achieved Since the First Economic Census Being Conducted 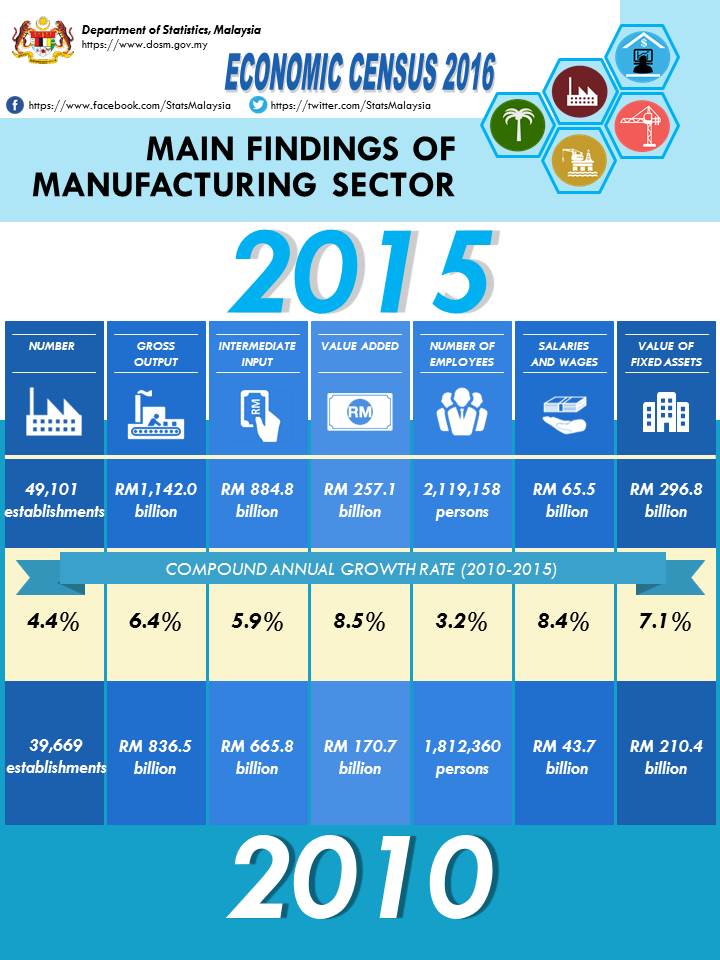 The Gross Output Value of RM1.1 Trillion Was Registered as the First Ever Achieved Since the First Economic Census Being Conducted

Performance Of The Manufacturing Sector

The manufacturing sector recorded a gross output value of RM1,142.0 billion in 2015 compared to RM836.5 billion in 2010 with the compound annual growth rate (CAGR) value of 6.4 per cent per annum. The gross output value of RM1.1 trillion was registered as the first achievement through out the Economic Census that has been carried out. In line with the rapid growth in gross output, the value of intermediate input also increased by RM219.0 billion to record RM884.8 billion or CAGR of 5.9 per cent. This resulted with the value added of RM257.1 billion for the year 2015. During this period, the number of establishments recorded an increase of 9,432 or CAGR of 4.4 per cent. The number of employees in this sector also  reported a 3.2 per cent increase in CAGR with 2,119,158 persons as compared to 1,812,360 persons in 2010. Meanwhile, the salaries and wages paid in 2015 amounted to RM65.5 billion compared to RM43.7 billion in 2010

In the period from 2010 to 2015, the gross output value of the manufacturing sector increased by 6.4 per cent per annum. Electrical, electronic and optical products sub-sector was the largest contributor of gross output value with RM322.0 billion (28.2%) for Economic Census 2016. The second largest contributor was petroleum, chemical, rubber and plastic products sub-sector with RM299.1 billion (26.2%) followed by vegetable and animal oils and fats & food processing sub-sector with RM199.8 billion (17.5%) .